Mantras increase the energy level in our body,
harmonize energy centers and cleanse the aura 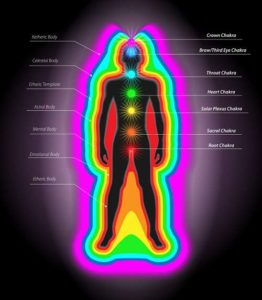 By practicing yoga, meditating or singing mantras, we become more aware of the energy in and around us, and can strengthen and even heal our aura. Then we become really strong, holding on to our vocation and our life path/mission, no matter what other people say or think about us. Any negative energies such as anger, envy, or jealousy cannot so easily destroy our peace and happiness. Strengthening our aura is really very important – for our emotional, mental, but also physical health. After all, we know that all energies translate into the functioning of our bodies and internal organs. This is already scientifically tested.
Mantras help to heal human relationships, alleviate conflicts, and facilitate the process of forgiving, forgetting, and forgiving the wrongs and harm done.
If we apply the process of mental visualization for the person or persons we want to help and heal, by singing mantra sounds, we will send them the energy of well-being and health.

For many people the aura and chakras seem to be purely fictitious inventions, but such an approach is due to a lack of knowledge. Aura was already known about in ancient Egypt, India, Greece and Central and South American countries. Research on the aura and the non-physical components of our reality was already carried out in the late 18th century. In the late 1980s engineer Yuri Kravchenko and doctor Nikolai Kalaszczenko constructed a device called phase aurometre. It was believed that on the basis of measurements of electromagnetic radiation emitted by objects at a distance of up to 1.5 meters from the surface of the object, the aura can be measured. It was to be obtained via using electronic filters to test components of a specific frequency.

Currently, there are no grounds to discredit the so-called “spiritual” components of the nature of reality, because there is strong scientific evidence confirming their existence. The key is Kirlian photography. The name comes from the name of the man who is considered to be its main inventor – Semyon Dawidowicz Kirlian. It should be mentioned that the first man who made a scientific photographic registration of the aura was a Pole of Armenian origin who was involved in technology – Jakub Jodko Narkiewicz (born on February 20, 1898 in Yekateryndar, now Krasnodar, died on April 4, 1978). At the end of the 1930s, Kirlian repeated Narkiewicz’s achievement, photographically capturing the energy shell – aura. The aura is composed of individual layers. According to the current knowledge, there are from 7 to 21. These coatings permeate one another, just like various dimensions of reality.

In India there is an Indian system of 7 main chakras and a hormonal and nervous system.

Since ancient times, the Slavic culture has practiced uttering mantras, and they have been called AGMAMI – words of power in which God is incarnated. Slavic shamans, healers, priests used the power of mantras to work with the inner vibrations of man, which contain the power to change external reality. Scientific research has shown that listening to mantras harmonizes two brain hemispheres to an Alpha state of mind within a few minutes, and the water crystals in our physical body, of which we have more than 70 percent, take on a structural shape under the influence of harmonious mantra vibrations. Mantras are very helpful not only in meditation to achieve higher states of consciousness, but also in everyday life, calming down emotions, calming the mind and purifying negative thoughts, entering into inner harmony, feeling positive feelings like joy and love.
AGMY consists mainly of one, two or less three words. And don’t try to understand them logically, because this is something beyond understanding of the brain and works on the subconscious level. AGMY originates from a single pragmatic language and is now found in the languages of ancient peoples such as hunters, Indo-Aryans, Persians, Jews, Mongols, Chinese and other old cultures.

Gayatri Mantra is a great tribute to the energy of the Sun. Slavic culture has deep connections with the civilization of ancient India. This is evident, for example, by the language similarities of Sanskrit and ancient Polish speech. Gayatri Mantra is a prayer to Savitur (a figure of God caring for the Sun), emphasizing meditation on his perfect light with a request to enlighten the intellect.
“The Earth, the Space, the Sky is the Sun’s beloved (chosen) glow (light) of God, let us contemplate (meditate) the thoughts that will inspire us.

The Mantra Gayatri is in Sanskrit: 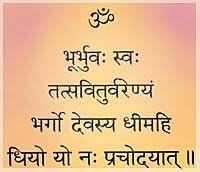 Vedic messages say that Gayatri Mantra is the most powerful mantra that has the power to destroy karma.

Translation of Gayatri Mantra into Polish:

Meditate on OM, the pra-sound of God, from which three spheres begin, Bhur – earthly, Bhuvah – ethereal, more subtle and Swaha – blue. We worship (Varenyam) the highest, incomprehensible, Divine Being (Tat), and the creative, life-giving force manifested in the sun (Savitur). We meditate (Dhimahi) on the radiation (Bhargo), the light (Devasya) of God, which annihilates all darkness, ignorance and all vices. May your light illuminate our mind (Dhi) – God, we earnestly beg you to do it (Yo nah Prachodayat).

Mantra OM Mani Padme Hum, the most famous mantra in Tibet, comes from ancient India and was adoppted into Buddhism in the 10th century AD. It is a bodhisattva mantra of compassion (bodhisattva in Sanskrit means awakened good). The literal translation of Aum Mani Padme Hum mantra is: praise the jewel in the lotus. One of the more literary translations is: Be greeted by the treasure in the lotus flower. Depending on the Buddhist school, mantras are pronounced differently.

RA MA DA SA – a mantra that heals and opens the heart. It is an ancient mantra that contains eight syllables. Saying them stimulates the flow of energy in the central channel of the spine, and by stimulating points on the palate also the brain chemistry, bringing peace, joy and serenity.

The complete ancient mantra consists of eight syllables: Ra Ma Da Sa Sa Sa Say So Hung (pronounced Hang)
These are eight sounds that can be felt after the first performance.
They stimulate the flow of energy in the central channel of the spine and in the energy centres (chakras).
The sounds of Ra Ma Da maintain a balance of tattva (elements, forces that stand behind the elements) in the energy body.
The power of mantra is related to its ability to connect Earth and Ether (bottom and top, low and high).
Thanks to this, this mantra has a healing effect and brings balance to our quantum field, the heart chakra. It allows to balance emotions and positively influence the work of the brain, balancing the work of the left and right hemisphere and acting not only on the spiritual and emotional level, but also on the physical and mental ones. Ra Ma Da Sa acting on the pituitary gland, activating the nervous system, muscles and cells in the process of blood flow stimulates energy flow in the body and brings the body into a state of healing.

What do syllables full of mantra mean?
The meaning of Ra Ma Da Sa Sa Say So Hung

Ra – means the Sun, and the connection with its vibration gives energy.
Ma – means the Moon, which teaches us sensitivity.
Da – is the Earth that stabilizes us in its roots.
It is the impersonal Infinity.
Sa Say, it is the total Infinity.
So – our manifestation, our personal sense of connection and identity.
Hung – the vibration of connection, the experience of the true Infinity, of ourselves and the truth.

This Mantra begins the practice of kundalini yoga with a message from Yoghi Bhajana.

I bow to the subtle divine wisdom, the divine teacher within.

Translation: That’s the conclusion of the Heart Sutra

Hindu songs are called bhajans read research, which are sung to clear the mind of negative thoughts.
This song was sung by Mahatma Ghandi for 60 years every day.

“Love is the strongest force the world
possesses and yet it is the humblest imaginable.”
~ Mahatma Gandhi

You are cordially invited to my Social Media : )