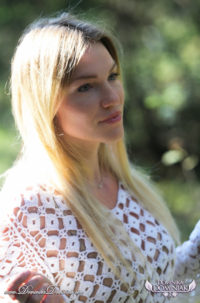 …And so she’s came… No idea where from? In such a cordial song…

Today at this time, each of us is alone and waiting for her visit…

That bright soul from the meadows and forests, from the Poland, the princess, though without a crown, which is such a burden for us nowadays, because it’s invisible. Dominika charms us with her sincere tenderness of love prayer.

In the sunny reggae lullaby seducing everyone. Dominika Dominiak does not pretend to be anybody – she is herself with outgoing love, pouring out of her heart, awakened with the tide of mantra,in a mystical trance of nyiabinghi rhythms from the heart of Jamaica. It’s a wave of Dominica’s grace, like God’s Body born in “The White” (“Bieleni” – a polish movie). And it is for the people from the holy truth of life and a lonely spirit who is sought in the empty churches of today.

Dominika Dominiak about herself:

I started singing in 2006 and attended voice emission training to some of the best singing teachers, Agata and Tadeusz Konador from Warsaw (Read more…), Olgi Szwajgier from Krakow (Read more…) and Ewa Głowacka from Wrocław (Read More…). Previously I was absorbed in art, painting, acting and played a few episodes in well-known series (Read more…), I also studied fashion design. I was also a dancer, at the age of 13 I got into the Warsaw musical METRO by Janusz Józefowicz.

At the age of 17 I had a serious accident on a motorbike, in which I was a passenger. In the accident I suffered a spinal injury in three places, I had a malfunctioning left leg, fortunately only for two weeks, although the doctors’ diagnosis was different. During the accident, when I was flying in the air about 20 meters and fell on the asphalt, I experienced camming out of my body with my soul and saw the whole event as if from a bird’s eye view, the creatures of light came for me and said that I had to go back to the ground because I have a lot to do here. It was a very deep mystical experience and also very painful for the physical body. After the accident, 2 years I was coming to my physical and mental fitness. 3 years after the accident I focused on my spiritual development. I was also involved in painting. For many years I conducted light meditations and yoga classes and then I started to paint Mandala on individual order. (Read more…)

Why did I start singing mantras?

I had a mystical spiritual experience listening to mantras chanted at a meeting with spiritual master Svami Vishwananda from Mauritius, who came to Warsaw in 2006. I decided to sing mantras and perform at concerts for adults and children, towards development of consciousness, to bring joy and light. You could see me in private kindergartens, yoga clubs and various halls in Warsaw, Wroclaw and Gdansk. I performed several times at the festival “Cosmic Harmony – the Rally of Free People” (“Harmonia Kosmosu – Zlot Wolnych Ludzi”, I was a guest at the festival “Kazimiernikejszyn” 2018. I talked about my beginnings with mantra singing in Four Polish Radio (Read more…).  I was also involved in painting. For many years I conduced light meditations and yoga classes and then I started to paint Mandala on individual order (Read more…).

Dominika Dominiak in her work is inspired by the spirituality of the East. She combines ancient mantras in Sanskrit with various musical styles. Her warm voice combined with the sound of Roots Reggae music fills the space with positive vibrations and takes the listener to the dimension of well-being and harmony. Dominika works with well-known musicians from Poland and Jamaica. She has recorded in the cult Grafton Studio in Kingston, Jamaica, as well as in studio 701 of the famous jazz pianist Leszek Możdżer in Wrocław.

Her songs express the great spiritual potential of mantras, which she sings in various musical styles including reggae and ambient. About the music she creates, she says that it is the melody of mind and heart. – The word “mantra” comes from the ancient Sanskrit language. The syllabe “man” in Sanskrit has a double meaning: it means both “mind” and “heart” and “tra” from the word trang meaning projection.

To better understand the meaning of mantras Dominika attended Sanskrit lessons with her famous teacher Tomasz Ruciński (Read more…). Scientific research has shown that listening to mantras harmonize two brain hemispheres to an Alpha state of mind within a few minutes, and that water crystals in our physical body, of which we have more than 70 percent, take on a structural shape under the influence of harmonious mantra vibrations. Mantras are very helpful not only in meditation to achieve higher states of consciousness, but also in everyday life, calming down emotions, calming the mind and purifying negative thoughts, feeling positive feelings like joy and love.

Dominika Dominiak recorded her first single Gayatri Mantra in reggae style in 2012, crowning it with a video with over 172,000 views on Youtube (Listen
Gayatri Mantry). The recording was made in the beautiful areas of the Ślęża Mountain area, where the artist wanted to show the interpenetration of Slavic and Vedic cultures.

In February 2017 she flew to Jamaica to record a single, where she spent 4 months and met world famous musicians, a close friend of Bob Marley and his sons. The result of this trip is a single “Om Mani Pad Hum” recorded in the iconic Grafton Studio in Kingston with the Jamaican Kabaka Pyramids Band “Bebble Rockers Band”, which was hosted at the Polish Ostróda Reggae Festival. In 2019 she was invited to Miami to Julian Marley’s studio and recorded there bass and drums to 6 songs for the mantras album with the eminent musician Jr Aston Barett from The Wailers – Bob Marley’s band. In 2019 she met world-famous musicians from Michael Crete’s ENIGMA formation and drummer Paul Kastick played drums to two mantras for the album “MANTRA & REGGAE”. (Read more…)

Dominika Dominiak has released 3 singles so far (Gayatry Mantra, Om Mani Pad Hum, Mantra Slavic – Radoro Daro Slawo) at first working with producer Andrzej Kasprzak, with whom she recorded in the studio the first single Gayatri Mantra in a long version of 17 minutes, later working with guitarist Adam Dudek, where she recorded a mini album “Vitamine D 3 in mantras” in her home studio, and made further recordings in Tomasz Korczak’s Red Yeti studio, where, among other things, male voices for the last single of Mantra Slavic Radoro Daro Slawo with famous Polish singers were recorded: Włodek Dembowski “Paprodziad” and Michał Rudaś, who even became famous in India.

The last two singles of Dominika Dominiak were receiving their final refined version and sophisticated in Leszek Możdżer’s studio 701 in Wrocław, where she recorded musicians and made mixes and post productions in cooperation with Łukasz Wójcik. She collaborated with such outstanding Polish musicians as: Alek Korecki (saxophone), Tomasz Osiecki “Ragaboy” (dilruba), Piotr Malec (tabla), Adam Skrzypek (drums), Lublin Street Band – with three musicians (denta section). Dominika Dominiak is in the process of final work on the album “MANTRA & REGGAE”, which she recorded for 9 years (Read more…).

“Love is the strongest force the world
possesses and yet it is the humblest imaginable.”
~ Mahatma Gandhi

You are cordially invited to my Social Media : )